I wanted to make some quick bunting and after trying single crochet, double crochet and considered something fancy like a shell stitch with letters sewn on after, I finally settled on a simple bobble stitch with a colour change for the letters.

It was pretty simple and after a little trial and error I settled on a bobble count that made the triangular shape I wanted and had enough bobbles to make up any letter.

I turned after each row, chaining 2 as a turning chain. This resulted in the bobbles on the front of the off rows and the back of the even rows. I didn’t mind this but you may want to slip stitch back across between rows to get all the bobbles popping forwards. 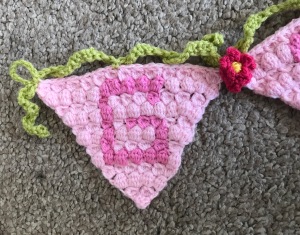 Row 5: 7 bobbles. (Start forming the letter in this row)

The middle 5 bobbles on rows 5 to 11 are where you will do your colour changes to form your letters. I carried the letter colour and crocheted over it as I went so that I only had 4 ends to weave in for each bunting.

To make the letters I just googled “pixel alphabet”. I can’t seem to find the exact one I used but as long as the letter is 5×7 pixels then it will work. This one would work.

For the vine to hang the bunting on I simply chained a long green foundation chain about twice as long as I needed and came back along the chain but only single crocheting (UK double) in every other stitch. This made the chain curl. I attached it at intervals along the bunting and used it to join each triangle at the corners.

I freehand crocheted the flowers and leaves but any flower would work.