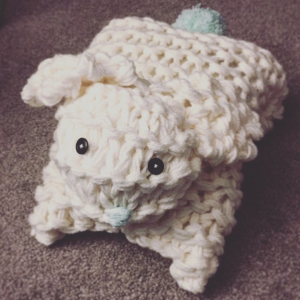 With Easter around the corner, I thought I would share my latest make…a giant knitted bunny for my little boys nursery!

This is a pattern that I had bought and saved when I first fell pregnant but I only just got around to giving it a go – just in time for the designer, the very talented Anne from Flax and Twine, to release a step by step video which helped enormously.

The pattern (which can be found here) is supposed to be made using an arm knitting technique and calls for super bulky yarn which I struggled to get hold of. I ended up with a super chunky which I think is not as chunky as the designer used. I used four strands together of Stylecraft Special XL in cream from Wool Warehouse.

I should probably say now that knitting isn’t my preferred craft although this has got me wanting to try it again. I thought that arm knitting would be a quick and fun introduction back into the craft and this is an awesome pattern!

The arm knitting itself was very easy to pick up. The step by step video helped enormously and is shot in such a way that you view Anne’s arms from above like you do your own arms. You can literally follow her movements step by step. The arm knitting took me an evening. It was so fast and you are never dealing with more than 20 or so stitches on your arms at once. You do need to make sure that you have time set aside for this though. Once the stitches are on your arms you are physically tied up until you cast off at the end. The postman came to my door and I had to answer with the stitches still on my arm and the giant balls of wool skirting behind me on the floor! My mum came over at that point and was on baby watch while I finished – I don’t think nappy changes would have been possible at this point!

Arm knitting done, I was a bit disappointed. I had knitted as tightly as I could but the finished result was too loose and that combined with the yarn being not really bulky enough meant that the stuffing (I used a single duvet) was clearly viable and I decided not to even finish sewing it up.

I unwound it back into giant balls and started again but this time using giant knitting needles. My mum made the kneedles out of wrapping paper tubes and I haven’t measured them but guess that they are 6cm or so. I followed the pattern again but knitted every row so that my finished bunny was very soft and squishy. I had originally purchased 6 balls of the XL yarn (1200g) but I didn’t use all of it since the needle knitted bunny took far less yarn. I guess I used 4 balls in the end.

The final result was great. It was smaller than the arm knit which was a blessing as the arm knit one was huge! This is maybe 1m nose to pom pom and is the perfect cushion/seat for my little boy to relax on. He loves it!

I finished it with big button eyes and a mint green nose and Pompom tail. I hope you like it. Leave me a comment below to tell me how you get on with arm knitting. Xx